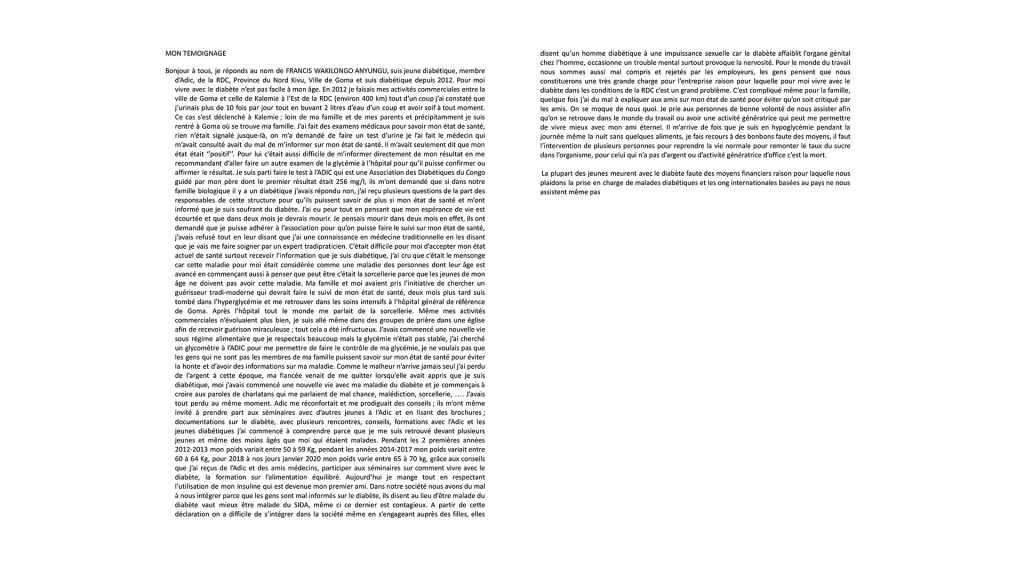 I am a young diabetic, member of ADIC, from DRC, North Kivu Province, City of Goma and I am diabetic since 2012. For me living with diabetes is not easy at my age.

In 2012 I was doing my commercial activities between the city of Goma and the city of Kalemie in the east of the DRC (about 400 km) when I suddenly noticed that I was urinating more than 10 times a day while drinking 2 liters of water at once and being thirsty at all times. This case started in Kalemie; far away from my family and relatives and in a hurry I returned to Goma where my family is. I had medical check-ups to find out about my health. Nothing was reported until I was asked to do a urine test. I did it and the doctor who had consulted me had difficulty informing me about my health. He had only told me that my condition was “positive”. It was also difficult for him to inform me directly of my result and recommend that I go to the hospital for another blood glucose test so that he could confirm or affirm the result.

I went for the test at the ADIC which is an Association of Diabetics of Congo guided by my father whose first result was 256 mg/l, they asked me that if in our biological family there is a diabetic I had answered no, I received several questions from the people in charge of this structure so that they could know more about my health and informed me that I am suffering from diabetes. I was afraid while thinking that my life expectancy is shortened and that in two months I should die. I thought I would die in two months indeed. They asked if I could join the association so they could follow up on my health. I had refused, telling them I have knowledge of traditional medicine and I will be treated by an expert traditional practitioner.

It was difficult for me to accept my current state of health, especially to receive information that I am diabetic. I thought it was a lie, because this disease for me was considered as a disease of people whose age is advanced. I also began to think maybe it was witchcraft, because young people of my age should not have this disease. My family and I had taken the initiative to look for a traditional-modern healer who would follow up on my state of health. Two months later I fell into hyperglycemia and found myself in intensive care at the general reference hospital in Goma.

After the hospital everyone was talking to me about witchcraft. Even my commercial activities were no longer going well. I even went to prayer groups in a church in order to receive miraculous healing; all this was unsuccessful. I had started a new life on a diet that I respected a lot but my blood sugar was not stable. I looked for a blood sugar meter at the ADIC to allow me to control my blood sugar. I did not want people who are not family members to know about my health to avoid shame and to have information about my disease. As misfortune never happens alone I lost money at that time, my fiancée had just left me when she learned that I was diabetic. I had started a new life with my diabetes and I was beginning to believe the words of charlatans who were talking to me about bad luck, curses, witchcraft…. I had lost everything at the same time.

ADIC comforted me and gave me advice; they even invited me to take part in seminars with other young people at ADIC and by reading brochures; documentations on diabetes, with several meetings, advice, training with ADIC and young diabetics I began to understand because I found myself in front of several young people and even those younger than me who were sick. During the first 2 years 2012-2013 my weight varied between 50 and 59 Kg, during the years 2014-2017 my weight varied between 60 and 64 Kg, for 2018 to today January 2020 my weight varies between 65 and 70 kg, thanks to the advice I received from ADIC and doctor friends, participating in seminars on how to live with diabetes, and training on a balanced diet. Today I eat while respecting the use of my insulin which became my first friend. In our society we find it difficult to integrate because people are poorly informed about diabetes, they say instead of being sick with diabetes it is better to be sick with AIDS, even if AIDS is contagious.

From this statement it is difficult to integrate into society even when working with girls. They say that a diabetic man is sexually impotent because diabetes weakens the male genital organ, causes mental disorder and especially causes nervousness. For the world of work we are also misunderstood and rejected by employers. People think that we will be a very big burden for the company, that’s why for me living with diabetes in the DRC is a big problem. It’s complicated even for the family. Sometimes I find it difficult to explain to friends about my health condition to avoid being criticized by friends. People make fun of us. I pray to people of good will to assist us so we can find ourselves in the world of work or have a generating activity that can allow me to live better with my eternal friend. Sometimes I have hypoglycemia during the day and even at night without any food. I resort to sweets because I cannot afford them. It takes the intervention of several people to get back to normal life to raise the sugar level in the body, for those who do not have money or a generating activity, it is death.

Most young people die with diabetes due to lack of financial means, which is why we advocate for the care of diabetic patients and the international NGOs based in the country do not even assist us.