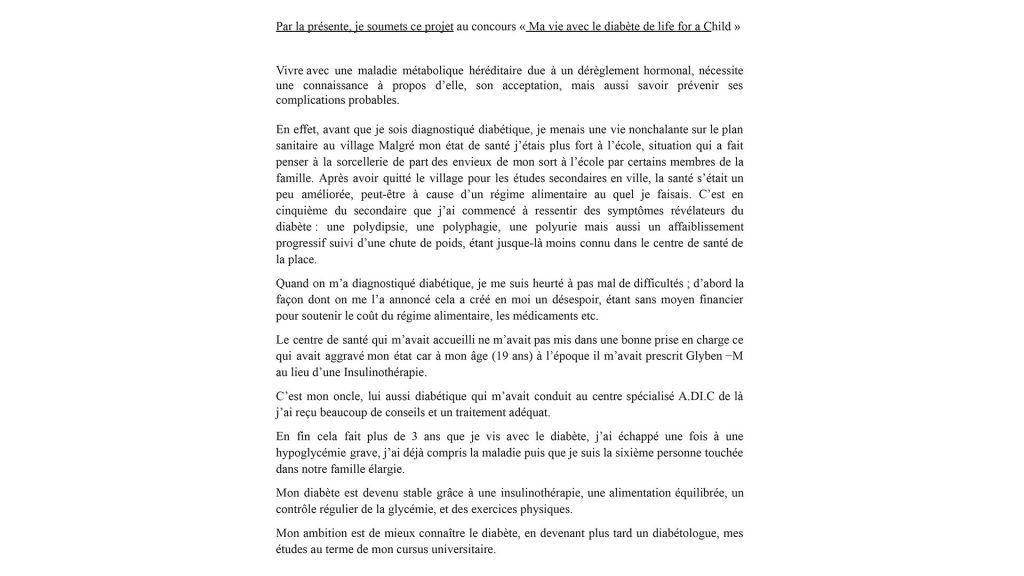 Living with a hereditary metabolic disease due to hormonal imbalance requires knowledge about it, its acceptance, but also knowing how to prevent its probable complications.
In fact, before I was diagnosed with diabetes, I led a nonchalant life in the village despite my health condition. I was stronger at school, a situation that made some family members envious of my fate at school think of witchcraft. After leaving the village for secondary school in the city, my health had improved a bit, perhaps because of the diet I was on. It was in the fifth year of secondary school that I began to experience symptoms that were indicative of diabetes: polydipsia, polyphagia, polyuria, but also a progressive weakening followed by weight loss, being until then less known in the health centre of the square.

When I was diagnosed with diabetes, I faced a lot of difficulties; first of all, the way it was announced to me created despair in me, being without financial means to support the cost of the diet, medication etc. I had to find a way to cope with it.

The health center that had welcomed me had not put me in good care which had aggravated my condition because at my age (19 years old) at the time it had prescribed me Glyben-M instead of Insulin therapy.

It was my uncle, who was also diabetic, who took me to the specialized A.D.I.C. center from where I received a lot of advice and adequate treatment.

In the end I have been living with diabetes for more than 3 years, I once escaped from a severe hypoglycemia, I have already understood the disease and I am the sixth person affected in our extended family.

My diabetes has become stable thanks to insulin therapy, a balanced diet, regular blood sugar control, and exercise.

My ambition is to learn more about diabetes by later becoming a diabetologist after graduating from university.