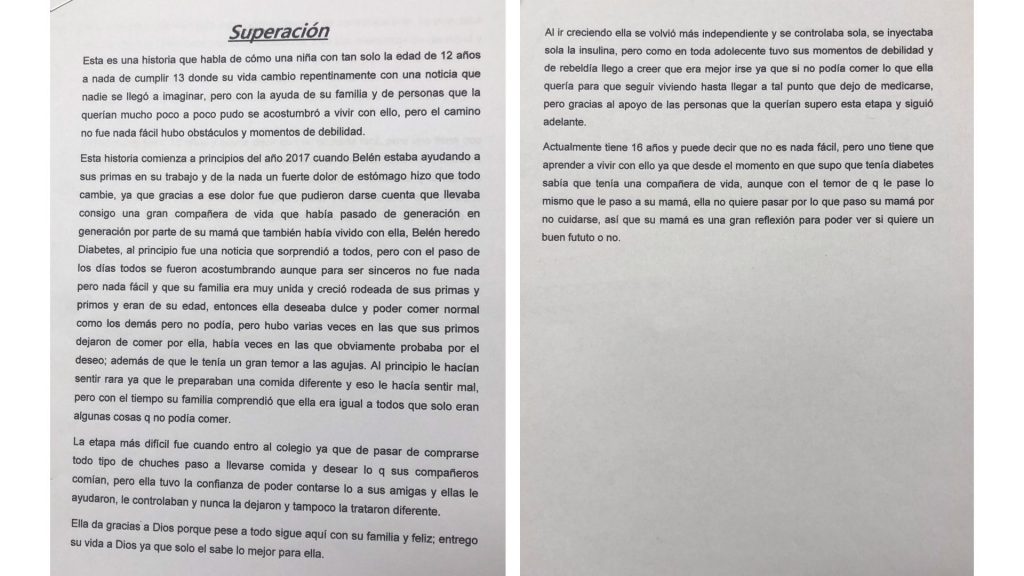 This is a story that talks about a girl who was only 12 years old, close to turning 13 whose life suddenly changed with news that no one ever imagined. But with the help of her family and people who loved her a lot, she gradually got used to living with it. But the road was not easy at all, there were obstacles and moments of weakness.

This story begins at the beginning of the year 2017 when Belén was helping her cousins at work and out of nowhere a severe stomach pain changed everything, because thanks to that pain they could realize that she was carrying a life companion that had been passed from generation to generation by her mother who had also lived with it. Belén inherited diabetes, at first the news surprised everyone, but as the days went by, everyone got used to it. Although, to be honest, it was not at all easy, and her family was very close. She grew up surrounded by her cousins and they were her age, so she wanted candy and to be able to eat normally like the others but she could not. There were several times when her cousins stopped eating for her, there were times when she obviously gave in to her cravings. In addition, she had a great fear of needles. At first they made her feel strange as they prepared a different meal for her and that made her feel bad, but over time, her family understood that she was the same as everyone else and that there were only some things she could not eat.

The most difficult stage was when school started, because she went from buying all kinds of sweets to taking food with her and wanting what her classmates ate. But she had the confidence to be able to tell her friends, and they helped her, kept an eye on her, and they never left her alone or treated her differently.

She thanks God because despite everything she is still here with her family and is happy; she gave her life to God as only he knows what is best for her.

As she grew older, she became more independent and self-managed, she took insulin by herself, but as with every teenager she had her moments of weakness and rebellion. She came to believe that it was better to fade away because if she could not eat what she wanted, then what was the point of continuing to live. She even reached a point where she stopped taking her medication, but thanks to the support of the people who loved her, she overcame this stage and moved on.

She is currently 16 years old and she can say that it is not easy at all, but she had to learn to live with it because from the moment she found out that she had diabetes, she knew that she had a life partner. Although she was afraid to have the same thing that happened to her mom happen to her, she does not want to go through what her mom went through for not taking care of herself, so her mom is a great reflection to see if she wants a good future or not.