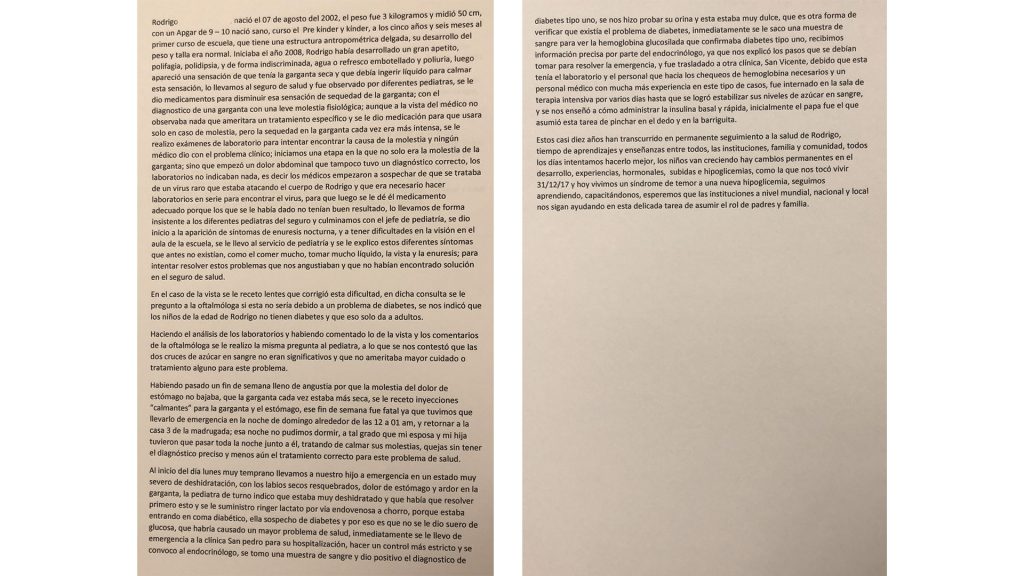 Rodrigo Rico de Ugarte was born on August 7, 2002. He weighed 6.5 pounds, and he measured 19 inches. With an Apgar of 9-10, he was born healthy. He attended pre-kindergarten and kindergarten, and he started the first year of school when he was five and a half years old. He had a thin anthropometric structure, and his weight and height development were normal.

The year 2008 began. Rodrigo had developed a great appetite, polyphagia, polydipsia, and indiscriminately drank bottled water or soft drinks and had polyuria. Then he had a feeling that his throat was dry, and he had to drink liquids to calm this feeling. We took him to a social security clinic, and he was examined by different pediatricians. He was given medications to reduce that sensation of dryness in his throat, and he was diagnosed with a slight physiological discomfort in his throat. Although, in the doctor’s opinion, he did not show anything to merit specific treatment and was given medication for him to use only in case of discomfort, the dryness in his throat kept getting more intense.

Laboratory tests were performed to try to find the cause of the discomfort and no doctor found a clinical problem. We started a stage in which it was not only the throat discomfort, but he also began having abdominal pain that was not correctly diagnosed either. The lab tests did not indicate anything. The doctors began to suspect that it was a rare virus that was attacking Rodrigo’s body and that it was necessary to do a series of lab tests to find the virus so that he could then be given the appropriate medication, because what they had given him did not have a good result.

We insistently took him to the different insurance pediatricians and we ended up with the head of pediatrics. The symptoms of nocturnal enuresis began to appear, and he had vision difficulties in the classroom. He was taken to the pediatric service and explained these different symptoms that did not exist before, such as eating a lot, drinking a lot of fluids, eyesight problems, and enuresis, to try to solve these problems that distressed us and for which the health insurance doctors had not found a solution.

For his vision, he was prescribed glasses that corrected this difficulty. In the visit to the doctor, we asked the ophthalmologist if this could be due to diabetes. We were told that children of Rodrigo’s age do not get diabetes, and that it only happens to adults.

After doing the laboratory analysis, having talked about the problems with his vision, and the ophthalmologist’s comments, we asked the same question to the pediatrician, to which he answered that the two blood sugar crosses were not significant, and that this problem did not merit further care or treatment.

Having spent a weekend full of anxiety about the discomfort of his stomach pain not subsiding and the dryness in his throat getting worse, he was prescribed injections to “soothe” his throat and stomach. That weekend was awful as we had to take him to an emergency room on Sunday night around 12 to 1 a. m. and return home at 3 in the morning.

That night we could not sleep, to such a degree that my wife and daughter had to spend the whole night with him, trying to calm his discomforts and complaints, without having the precise diagnosis, not to mention the correct treatment for this health problem.

At the beginning of the day, very early on Monday, we took our son to the emergency room in a very severe state of dehydration, with cracked dry lips, stomach pain, and a burning throat. The pediatrician on duty said that he was very dehydrated, and that this had to be solved first. He was given ringer’s lactate intravenously because he was entering a diabetic coma. She suspected diabetes, and that is why he was not given a glucose serum, which would have caused a greater health problem. He was immediately taken to the San Pedro clinic for hospitalization to do a more strict control. They called an endocrinologist, a blood sample was taken, and the diagnosis of Type 1 diabetes was positive. We were asked to taste his urine, and it was very sweet, which is another way of checking that someone has diabetes. They immediately took a blood sample to check the glycated hemoglobin that confirmed Type 1 diabetes. We received precise information from the endocrinologist. He explained the steps that had to be taken to solve the emergency to us. He was transferred to another clinic, San Vicente, because it had the laboratory and the staff that carried out the necessary hemoglobin checks and a medical staff with much more experience in this type of cases. He was taken to the intensive care room for several days until his blood sugar levels were stabilized, and we were taught how to administer basal and fast insulin. Initially the father was the one who took on this task of pricking his finger and belly.

Almost ten years have passed monitoring Rodrigo’s health permanently. A time to learn and teach for all of us, the institutions, family, and community. Every day we try to do better. Children grow, there are permanent changes in development, experiences, hormones, highs, and hypoglycemia, like the one we had to live on 12/31/17. And today we live through a syndrome of fear of a new hypoglycemia. We continue learning, training ourselves. Hopefully the institutions at the global, national, and local levels will continue to help us in this delicate task of assuming the role of parents and family.